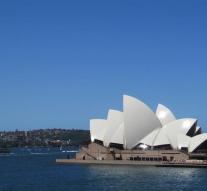 sydney - The iconic Sydney Opera House gets a major makeover. It is the biggest renovation since the music building was opened in 1973. It has Deputy Prime Troy Grant of Australian state of New South Wales announced Thursday.

The acoustics are improved. The building is accessible and unused offices will be converted into classrooms. The work, which begin next year and will last until 2020, will cost 138 million euros.

The iconic Sydney Opera House, designed by Danish architect Jørn Utzon, is among musicians, critics and other music connoisseurs known for its poor acoustics.