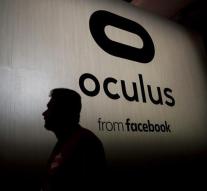 - Facebook is working on a virtual reality headset that does not require connection to a computer.

Mark Zuckerberg Thursday showed footage of a prototype of the device, which is more advanced than the Samsung Gear VR, and the common use would have on the Oculus Rift. The CEO of Facebook warned at the conference where he said that the product is still in development and will not be launched in the near future.

Facebook presented at the meeting also avatars that can be customized to the users real appearance. This enables them to create their own Virtual Reality identity. The avatars are capable of gestures and expressions to 'read'. The company indicated thereby to bring about the idea of ​​a social presence when interacting with other avatars.

According to Zuckerberg's social software, the next step for VR. 'Virtual Reality is the perfect platform to put people first, because of the virtual presence of the user. It feels like you're really in a different place, with different people.'