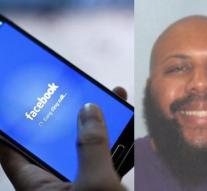 san francisco - Facebook said Monday in an assessment on how it handles violent (live) videos on the social network, indicated that the assessment needs faster and better. The review follows after a video of a murder in Cleveland Sunday for two hours on Facebook was online.

'We give priority to messages with serious security implications for our community and we are working to make the evaluation process more quickly,' said the vice president of Facebook in terms of operations and media partners.

The video shows how Steve Stephens filming himself in his car. 'I found someone that I'm dead,' he says to the camera. 'I'm going to kill this man here. He's too old.' Stephens then gets out and asks a 74-year-old man to mention the name of his girlfriend.

If the victim respond to it indicates he is told that the girlfriend is why he was shot. The man was then shot in the head despite a plea.