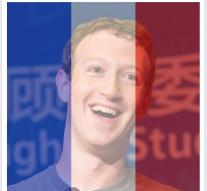 amsterdam - Saturday Facebook has implemented a new feature to change profile pictures to a photo with a French flag. This is to show support for the victims of the attacks in Paris Friday.

Mark Zuckerberg announced Friday evening that his thoughts went out to Paris. " There is nowhere in the world, no city, town or country, where there is place for this kind of violence, " placed the CEO of Facebook on his medium.

In all timelines of users is when someone has changed a profile picture, that it is possible to do this for their own account. It is also possible to set how long the profile photo this way may stand on the account.

In addition, it is also possible since Friday via Facebook to make friends updated through " Safety Check " you're safe and well. Anyone staying on Facebook has received notification of this in Paris.

It is not the first time that a profile can be adjusted in order to be able to show support. Even if gay marriage was introduced in the US, it was possible to change profile pictures to a rainbow flag.