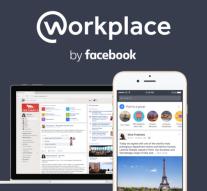 - Facebook has launched its Slack competitor Workplace. The service was called during a beta test Facebook at Work. Workplace should make it possible for businesses to communicate internally.

During the test groups were doing well with users. '' Usually Workplace replaces a listing things like internal e-mail, mailing lists and intranet that nobody uses or that do not work on mobile devices, '' said Julien Codorniou, the head of Workplace on Facebook, at Wired.

Workplace is built around the Newsfeed on Facebook, but also offers live streaming video, groups, events and instant messenger app. All data remains the company that it used emphasizes Facebook. Now the service is no longer in beta, there are also groups which may consist of employees of more than one company.

For the first thousand users pay a company $ 3 per active user per month. The following 9000 costs $ 2 per month. A company has more than 10 000 active users in one month than the additional cost users $ 1 per month. The prices outside the United States have not been disclosed yet.