Home / Tech / 'Facebook is working on censorship comeback to China 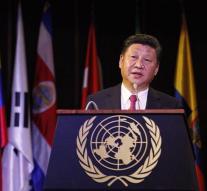 - Facebook has developed a tool which may not appear as messages on the service in certain areas. That the company has done to return to the Chinese market, where Facebook is now banned, The New York Times, based on anonymous Facebook employee.

In some countries, such as Pakistan and Turkey, Facebook blocks all longer certain subjects. But it is block after a message was posted, and a government has requested blockade on Facebook. With the new tool for China posts could be kept away from the newsfeed of Chinese users.

Facebook would not intend to suppress the messages themselves. The tool is instead given to a third party, possibly a Chinese partner,. Who can then take care of the censor certain topics.

The Facebook employees emphasize that the tool is just one of the ideas to get foothold in China. Possibly this is never used. Which has so far not happened yet and there is no indication that Facebook's code, the tool has presented to the Chinese authorities.