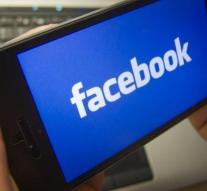 menlo park - Facebook changes the appearance of comments under photos and status updates. Comments are now in text clouds, just like in Facebook Messenger. Also the colors change. According to Facebook, the letters are better visible. Icons become bigger. Profile photos from other users are round instead of square.

Facebook daughter Instagram changes the design of his discussions as well. Replies to comments are, with a recurrence, directly below the comment being commented. Thus, the course of a discussion is clearer.