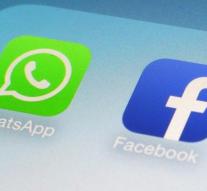 london - UK privacy watchdog ICO reports that Facebook has agreed to temporarily stop the data sharing between WhatsApp and parent company Facebook. According to Reuters, the data of WhatsApp users are not sufficiently guaranteed by Facebook and would use illegally obtained data can lead to hefty fines.

WhatsApp announced in August that it was going to share some data with Facebook, the company that bought it a year ago to over 15 billion euros. Worldwide users and privacy watchdogs rebelled against the move of the chat service. Users were given the opportunity to exclude themselves from data sharing, but now that standard parts.

Director Elizabeth Denham ICO says happy to be with the temporary abandonment, but also calls on the companies to better inform users about what data is now being exchanged and exactly how users can get a grip on it. 'We found that users have a right to transparency and protection, but Facebook is there to this day do not agree,' said Denham.