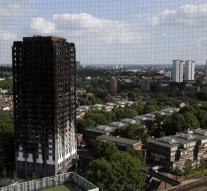 london - The wall covering of the Grenfell Tower burned out in Britain could not be used in such a large building. 'I understand that this facade cover, this flammable coating that is banned in Europe and the US, is also prohibited here,' said Minister Philip Hammond (Finance) according to British media.

The cheap wall covering is seen as the reason that the fire could spread rapidly. The government concluded after the fire in the London residential tower, with tens of deaths falling that the material should not have been used on a building that is over 18 meters. The minister, according to his spokesman, referred to that statement.