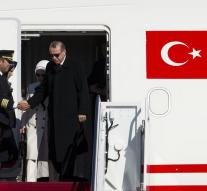 - According to a Turkish former soldier had two F-16 Air Force pilots who participated in the failed coup in Turkey's Erdogan in sight. Why do not they fired on him, is a mystery, said the military told Reuters.

Erdogan Friday flew back from his holiday in Marmaris and Istanbul direction could have been shot there by the pilots. A government official confirmed that the presidential apparatus, which was also accompanied himself has been through two F-16s, Friday at risk.

In the hotel where Erdogan enjoyed his holiday, he escaped for his flight probably death. Armed coup Friday would have visited him there, but the prime minister was already on its way to Istanbul.