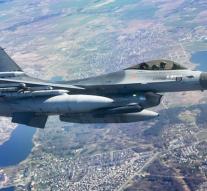 the hague - The Netherlands is re-engaging F-16 in the fight against Islamic state. Early next year, the pilots were trained to traverse the Al Azraq IS statements in Iraq and Syria from the Jordanian base.

A cabinet decision on this will be expected soon, probably next week, Friday. The ministerial council then gives its blessing to the extension of several missions, thus confirming The Hague's sources.

Thus, participation in the UN mission in Mali is extended by one year, with fewer men than the current three hundred.

The responsibility for the base camp in Gao will be transferred to another country next year.