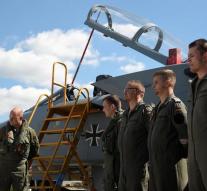 - The German government suspects that Islamic extremists are trying to join the military to get military training that way. Says a government document seen by Sunday newspaper Welt am Sonntag.

To counter infiltration by extremists want to leave the armed forces recruits now vetting by military intelligence. This would mean the laws pertaining be adapted to the armed forces. According to the newspaper the German government agrees on the amendment next week.