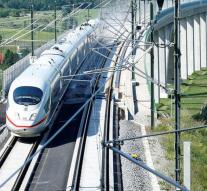 berlin - Extremists have made the track in various places in Germany on Sunday night. In cities like Hamburg, Cologne, Dortmund and Leipzig, passengers were delayed by sabotage, in total, the track in thirteen places was unavailable.

The German police suspect that perpetrators should be sought in left-extremist circles and that the actions are intended to protest against the G20 summit held in Hamburg in three weeks. The authorities take account of some 8000 protesters who come to Germany for the summit on 7 and 8 July.