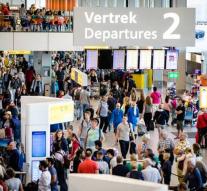 That made the airport company known on Friday at the presentation of the half-yearly figures.

During the May holidays, due to the strong growth of the number of passengers, occasional long queues were created at Schiphol. In order to prevent these problems from occurring in the even more busy summer holidays, additional security officers were used during peak times.

The additional costs incurred by these measures brought about the result of the airport business in the first half of the year. Schiphol recorded a net profit of 117 million euros, a little 3 percent less than a year earlier.