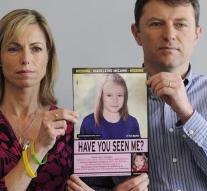 - The British detectives who have been searching for Portugal for years for missing child Madeleine McCann have been given extra money to investigate a new track. An Eastern European widow might have crucial information, according to British media.