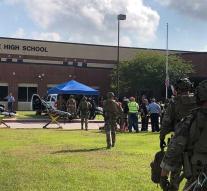 santa fe - The American authorities have found explosives after the shooting at a school in Texas. They were in and near the Santa Fe High School, reports the police.

The newspaper Houston Chronicle reported on the basis of a police source that it was so-called pipe bombs. It is still unclear whether explosives have also exploded. The shooter would have been further armed with an AR-15 gun and two other firearms. The authorities have not yet confirmed that.