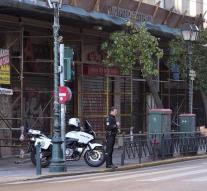 athens - The Greek police on Monday found a bomb outside the Labour Ministry in Athens. The explosive was hidden according to sources within the police in a backpack.

The authorities came the bomb on the track after a newspaper was tipped off about an imminent attack by the department. It is controlled explosive detonated. It is still unclear who left the bomb.

Greece has often been rocked in recent years by bombings. The country has a long history of political violence, which further has flared since the government took unpopular austerity measures in 2010 under pressure from international lenders.