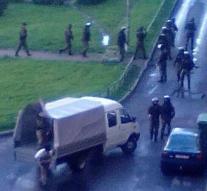 - The emergency services in the Russian city of St. Petersburg Wednesday massively uprooted after two explosions were heard in a residential block in the city. The cause of the explosion is not clear. According to unconfirmed reports on Twitter it is an anti-terrorist action.

Photos on social media showing dozens of heavily armed officers. The building was not evacuated. Why can no one out.