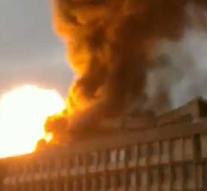 lyon - On the roof of a university building in Lyon, France, several explosions took place on Thursday morning. This is what University Lyon 1 reports via Twitter. According to that same source, the situation is...

According to information from BFMTV, the fire broke out on the roof terrace of the campus. The explosion would have arisen during work. According to that same source, three gas bottles exploded.

Via social networks, the university advises to stay away from the situation for more than 100 meters.