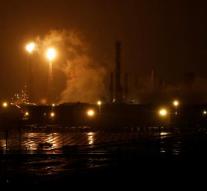 crosby - All citizens living in a 2.4 mile radius of a chemical plant in the southwest of the state of Texas are evacuated.

The power has fallen due to Hurricane Harvey. Also, the backup generators do not work, which are flooded.

The nuclear power plant is in Crosby. A few hours earlier, the staff members were evacuated because of the risk of an explosion. There would have been more than 100 millimeters of rain at the factory of the French multinational Arkema, which focuses on the production of high-quality chemicals.