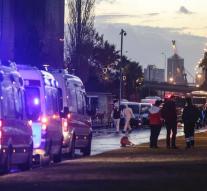 izmir - An explosion by a bomb in the Turkish city of Izmir, a famous seaside resort, injured eight people on Thursday morning.

The bomb was in a dirt container, at which time a shuttle bus drove. Most of the victims were in that bus. The windows of the bus have been thrown by the explosion. Also, cars were damaged.

The attack has not yet been claimed. In Turkey there are more attacks by, among other things, Islamic State and radical Kurds.