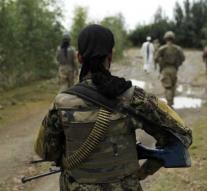 kabul - In a bomb attack on a mosque in East Afghanistan, dozens of victims have fallen. In the province of Khost, according to a local driver, at least twelve people were killed and 33 wounded.

The number of victims is likely to increase even further. People came together Sunday for the afternoon prayer at the mosque. That is how the NOS reports.

The prayer house was also used as a registration center for the national parliamentary elections in October.