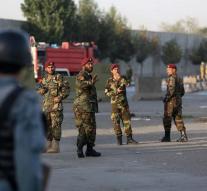 kabul - In the center of the Afghan capital Kabul on Monday evening a heavy explosion occurred late. The blow was followed by gunfire. About the cause of the explosion, and whether there are victims, is not yet known.

The explosion took place just hours after 24 people were killed in Kabul by a double suicide attack by the Taliban. Bombs exploded in a busy area near the Defense Ministry and a big market in Kabul. Nearly a hundred people were injured.