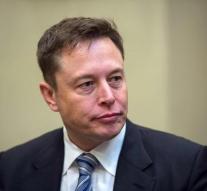 melbourne - A group of pioneers in the field of robotics and artificial intelligence, including Tesla topman Elon Musk, called on the United Nations in an open letter to ban the development and use of killer robots. According to The Guardian, the letter was signed by a group of 116 specialists from 26 countries asking for a ban on autonomous weapons.

The letter was launched around the opening of the International Joint Conference on Artificial Intelligence in Melbourne. The United Nations recently agreed to begin formal discussions about such weapons, such as drones, tanks and automated machine guns. As a result, the group, including Google's Mustafa Suleyman, has sent the open letter calling on the UN to quit the gun race for killer robots that are under way.

Specialists warn that killer robots after gunpowder and nuclear weapons threaten to unleash the third revolution in warfare. Once developed, armed conflicts with deadly autonomous weapons can be fought on a larger scale than ever, and much faster than people can understand. They can be deployed by terrorists and despots against innocent people. In addition, hacked weapons can behave in unwanted ways, 'said the letterwriters.

The specialists point out that there is not much time to counter this development. '' Once this Pandora box has been opened, it will be very difficult to close him again. ''