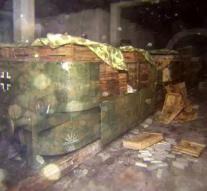 amsterdam - The enigmatic pictures of the Nazi train with chests full of bullion in a Polish real tunnel or a fine piece of ' photoshopping' ?

In Poland itself, they are not out. The Polish daily Fakt went with the mysterious images of the Panzerzug along the National Railway Museum in Warsaw. There, it was found that it is a German diesel locomotive ' Panzertriebwagen 16'.

The Poles have a monster in their collection. But the train on the photos- which in many details differs from the train at the museum- is not real, the experts do not dare to take on their behalf. The ' museum train ' fell after the Second World War in the hands of the Soviets things from demolished or set up correctly. On the other hand is also not excluded that images of the train museum website are extracted and processed in the computer to the now surfaced photos.

The Polish journalists also have a gaming expert on the pictures loose. This expert no typical abnormalities seen by photoshopping and exclude the images were taken from a computer game.

However, he noticed the strange light on. Moreover, there is nowhere to be seen damage from an explosion which the Germans would collapse the entrances to the tunnels under project-Riese.

The bars in the wooden boxes seem more silver than gold. Also notable is that the camouflage sail on the train is spotlessly clean. And that after seventy years. The wooden boxes do not appear to be affected by the ravages of time, according to insiders or to explain. Formwork for weapons and other items were extensively treated with oil, making them more likely to be found nearly intact or discolored.