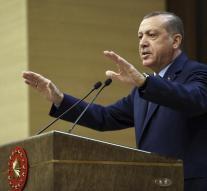 istanbul - A special committee of the Turkish parliament has approved plans to give the president more powers. Thus the way is cleared for the parliament in order to debate and vote.

The move led to strong protests from the opposition. It is the intention of the Islamic AKP Erdogan to transform the state into a presidential system. In addition, the president is not only head of state but also head of government. The prime function shall be canceled. The change Erdogan would get a lot more power. The opposition fears a dictatorship.

In parliament, the AKP support of the ultra-nationalist MHP and therefore a majority for the plans. After the vote in parliament must be on a referendum in the spring.