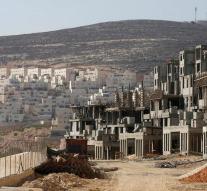 jerusalem - The Israeli government has authorized another 463 settler homes in the occupied West Bank. Israel rejected the criticism of the Special Envoy of the United Nations Nickolay Mladenov, who called the expansion of Israeli settlements in Palestinian territory Monday an obstacle to peace.

In the settlement of Elkana rises a nursing home with 234 apartments, the Israeli peace organization Peace let know now. thirty houses are being built in the settlement of Beit Arye and Givat Zeev twenty. For all 179 completed homes granted planning permission retrospectively Ofarim.

On the West Bank, Palestinian autonomous region, home to an estimated more than 550 000 Israelis. In addition to the 125 authorized settlements there are even a hundred so-called 'wild' colonies.