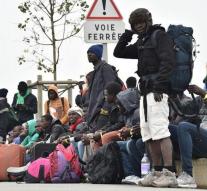 - The bringing of migrants from Calais to one of the 451 organized centers in France, will continue Tuesday and Wednesday. For Tuesday includes the deployment of 45 buses, Wednesday should another forty driving.

Minister of Internal Affairs Bernard Cazeneuve Monday expressed satisfaction with the peaceful conduct of the evacuation of the 'jungle' as the huge encampment has become known. He told French media that the situation is under control. The recalled 1250 policemen and gendarmes watching.

Still, not everyone shares his opinion. The charity L'Auberge des Migrants expects a hard core will want to maintain the camp. That group can grow up to two thousand men, according to a spokesman, and will continue to require transport to Britain.

Elsewhere in France oppose some smaller shelters against the arrival of asylum seekers from Calais. Saint-Bauzille-de-Putois For example, a village of about 1800 inhabitants in the southern department of Herault, we strongly oppose the arrival of 87 refugees.