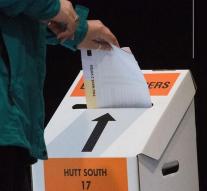 wellington - New Zealanders went to the polls on Saturday to elect a new parliament. It is one of the most exciting elections in the country's recent history.

The battle between the ruling center-right National Party of Bill English and the opposition party Labor of Jacinda Ardern will be a neck-to-neck race according to the polls. Both parties are not expected to reach a majority of the votes and are likely to fall back on smaller parties to form a coalition. Negotiations with those smaller parties are expected to take weeks.

The polling stations closed at 19.00 (09.00 Dutch time). The official results will be published in two weeks.