Home / World / 'Exchange' seems to be an option in formation 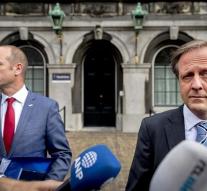 the hague - Parties participating in the formation of a new cabinet-Rutte III tend to exchange. They want to do as little water as possible with some important requirements. In return, they could drop other points. It resembles the way in which the Cabinet Rutte II was established between VVD and PvdA.

D66 leader Alexander Pechtold, like his Christian ununion colleague Gert-Jan Segers, finds that no compromise can be reached on principles. He sometimes finds it wiser to conclude that 'we tackle one problem in the way you think ideal and the other like the other one that would see. 'He said that Wednesday after a signing with Segers on the first day of the formation after a three-week summer break. Segers also said exchange could 'could'.

READ ALSO: Groningen's gas and pensions on the table

D66 and the Christian Union (CU) differ fundamentally from opinion on, among other things, star aid for the elderly who find their lives complete, embryo breeding, multiple parenting (for homophobia) and weed policy. Pechtold feels nothing to 'brush away the differences' in vague texts. ' 'If you try to come to terms with difficult issues, you should ask yourself if you both have something with it. '

The D66 foreman exchanges subjects where the parties differ greatly from each other, sometimes rather. 'Then you can also show to the Netherlands why you are making progress with the one and the other agreement that is not going to be done. '

Pechtold also warned that the negotiators should not blind to principles. 'That upsets you. If you are only a minority in your own right, then the Netherlands will not be better off. '

The subjects on which CU and D66 differ, are on the agenda at the formation on Thursday. The negotiators of VVD, CDA, D66 and CU start again at 10 o'clock.