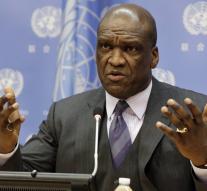 - A former chairman of the United Nations General Assembly on Tuesday along with four others officially indicted for corruption. It involves John Ashe of Antigua and Barbuda, which from 2013 to 2014 was president. He would have received more than $ 1.3 million in bribes from Chinese businessmen to give them the construction of a conference center in Macau.

The case came to light when an investigation was carried out large-scale skulduggery at the headquarters of the United Nations in New York. Besides Ashe is also a billionaire from Macao Ng Lap Seng, officially charged.

The pair is just like the other three accused, in September solid. Heidi Park, a sixth suspect was no longer persecuted.