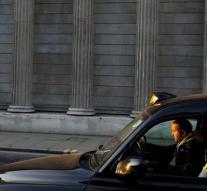 cardiff - A woman who, with a pathetic story, ransomed more than 60,000 euros with her ex-husband, has to end up in prison for three years.

The woman had sent her former husband e-mails that her legs and arms had to be amputated because of a serious illness and that she urgently needed money.

42-year-old Linda Vaughan said she had to live in a tent due to money problems. Ex Colin Wilton, who still had a weakness for her, made 201 times money in a period of four years, writes The Guardian. One time a few bucks, the other time the 65-year-old taxi driver paid a few thousand euros.

She was not ill, but had just remarried and used the money for a luxurious life.

The couple had lived together for two years.

Linda's stories to get money were getting stronger. Eventually she wrote about a serious blood poisoning. The expensive battery of her wheelchair would also have been stolen.

The taxi driver has lost all his savings and lives in a small room. With 60-80 hours of work he now earns a small 900 euros per month. He urgently needs an operation on his shoulder, but can not afford the time in the hospital.