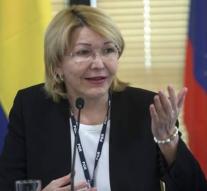 brasilia - The dismissed Attorney General of Venezuela Luisa Ortega said Wednesday at a meeting of South American lawyers in Brasilia to prove that President Nicolás Maduro has been involved in the corruption scandal surrounding the Odebrecht conglomerate. Apart from Maduro, Diosdado Cabello and Jorge Rodriguez, other headlines of the Venezuelan Socialist Party, are also blamed.

Ortega told her colleagues that Cabello received something of $ 100 million from the Brazilian company, which operates worldwide and has also guilty of reversal practices elsewhere. 'The international community must investigate these cases,' she said during a press conference.

Ortega, commissible to the government until March, fled through Colombia to Aruba on Friday because she was no longer sure about her life in her own country.