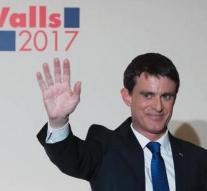 paris - Former French Prime Minister Manuel Valls, 54, confirmed on Tuesday that he was defending the Party Socialist (PS). Valls was Prime Minister on behalf of the PS from April 2014 until December 2016. He was counted to the right wing of the party.

His attempt in 2016 to become the PS candidate for the presidency failed because party members chose left-wing Benoît Hamon as leader. Hamon and PS members earlier this year had a historic defeat in the presidential elections. The PS candidate scored 6.3 percent of the votes, the lowest score in nearly fifty years time.

Valls soon turned out to feel a lot for President Emmanuel Macron's La République and Marche (LREM) movement. He is not yet a member. On Tuesday, the newly elected French parliament will meet. Valls is a Member of Parliament for the Essonne district where LREM did not use a counterclaim.