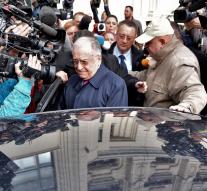 bucharest - Ex- President Ion Iliescu of Romania stood Wednesday before the court in Bucharest on charges of letting storming of a peaceful demonstration by miners in 1990. The now 85 -year-old Iliescu called the meeting at that time an " attempt at a fascist coup ".

Upon the intervention of the police, who opened fire, certainly were four dead and at least a thousand wounded. The Public Prosecution accused the former president a crime against humanity. The incident took place in the period when Iliescu the executed communist dictator Ceausescu was followed. He would remain president until 2004.