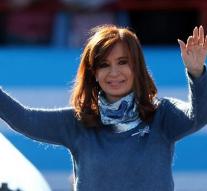 In the presidential elections for the parliament, the former head of state (2007-2015) met her new party Unidad Ciudadana (Civilian Unit) on sunday, in October she wants to make herself a senator for the province of Buenos Aires.

The presidential elections must be taken into account in the political spectrum. Only parties and list connections that receive at least 1.5 percent of the votes can participate in the elections on October 22nd. Then half of the deputies and one-third of senators will be elected. Surveys show that Kirchner must be able to win a mandate.

The interim parliamentary elections are also considered as a test for the center-right government of President Mauricio Macri. At present, his coalition is not an absolute majority in Congress. According to surveys, it is unlikely that this will change with the October elections.