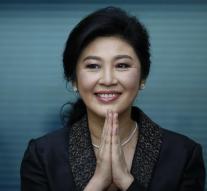 bangkok - Former Thai Prime Minister Yingluck Shinawatra has fled to Dubai. Leading members of her party report that they arrived safely in the emirate last week via Cambodia and Singapore.

On Friday, the Thai Supreme Court issued an arrest warrant against her after she had not appeared in a lawsuit. It is now postponed until 27 September.

Shinawatra is being prosecuted for negligence about the way in which she has handled subsidies for rice farmers. The farmers received an overpriced price, which the state cost money. Among other things, she is suspected of corruption.

Her brother Thaksin Shinawatra, who has also been Thailand's premier, has lived in self-sufficed exile in Dubai. He is also trying to escape the Thai justice after being sentenced to imprisonment in 2008, also because of corruption.