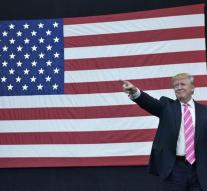 - The elected US president Donald Trump is considering Democratic former congressman Harold Ford Jr. To be appointed as the new Minister of Transport or any other department that writes the US website Politico. Harold Ford Jr. Was five times for the Democratic Party in the House of Representatives and did so on behalf of the southern state of Tennessee.

Ford jr., The son of the famous Democrat Harold Ford sr., Is African American and was remarkably active during the election campaign for the Democratic presidential candidate Hillary Clinton. But Ford is also good friends with the Trump family.

Anonymous sources have declared to Politico that there has been no official discussion between Ford and Donald Trump, but that there has already sounded out if he feels something.

A certain candidate for the upcoming government of Donald Trump's former Republican presidential candidate and retired neurosurgeon Ben Carson. Trump has him for the post of Minister of Housing and Rural Development on the eye.

Ben Carson was almost a year one of the presidential candidates in recent elections. he would have seen in March 2016 that Trump had the best cards to win the presidential election and he stepped out of the race.\n  \n  \n   advertisement

Carson is known as a religious and conservative man who, like Trump- has the heart on his sleeve. He has often made remarkable statements in the past. He would have lied in his biography about his education.

A spokesman Carson says that the minister post during Thanksgiving will consider.