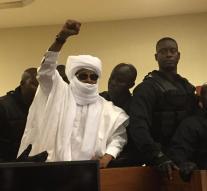 dakar - Former dictator of Chad, Hissène Habré, on Monday before a court in Senegal sentenced to life imprisonment for crimes against humanity and war crimes. He ruled the African country from 1982 to 1990.

Habré week after he was dropped off at the West African Senegal, where he was arrested in 2013. He was this year sentenced to death in absentia in Chad for crimes against humanity.

The African Union (AU) has called for trial in Senegal. Ten years ago, Belgium was seeking to try him, but got no cooperation from Senegal. That country finally decided to try at the urging of the AU Habré. It is the first trial against African dictator in Africa which was held with the support of the union.