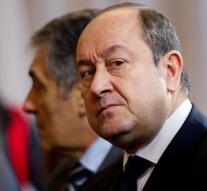 - A former head of the French domestic intelligence agency, Bernard Squarcini, Monday held by the \'police of the police,\' the IGPN (General Inspectorate of the National Police). It is not known why Squarcini, nicknamed \'The Shark\', was arrested.

He is the second people at the top from French investigators who has been arrested. Earlier Christian Flaesch was arrested, French media reported. That is, in the course of the same study. Flaesch was previously chief of the criminal police in Paris.