Home / World / 'Everything around us has been torn out' 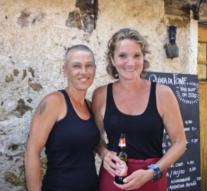 lisbon - The fire is still not completely under control, but many people are already returning to their homes after they fled the weekend for the weekend. Jolein Alten and Liedewij Schieving are making a mess at their farmers camp Quinta da Fonte.

Jolein says: 'We have just been home. The houses are ok, and the goats and the chickens we had to leave behind are still alive! But two caravans are burned. It's very smoky around us. And everything is black, everything is dirty- and everything stinks. It's a very bizarre, unreal feeling. The danger has also not gone completely, here in the region. The fire is not yet completely under control. It has rained for a while, but it has stopped again. It still smokes, the roots are still in the soil. Also a pair of garden hoses have been burned, that's the first thing we need to fix, we are buying now. No, I do not think the fire is coming back with us, everything around us has already been fired. The entire valley in which we live is burned down- and that is also very smoky. '

In retrospect, ladies on Sunday left just in time. 'It's a strange decision you should take. You want to stay as long as possible- because it's about our terrain, our life we've built! But at one point we could not see anymore. Then you think: I have to go away here. Now, of course, we are very glad we went away. You can stay, but you can not do anything. Yes, except that it can go wrong. We spent the night at a girlfriend. Loving to get us up. Together with our four dogs. No, we did not sleep really well. You're wondering all the time: how would it be home? '

Ultimately, it's just one thing: survive. 'But for ourselves we will have to make a plan: what are we going to do? Because for us the season has ended, we can not receive more guests this year. Yes, we will stay, I would not know where to go. Our life is here. We will have to clean, and the smoke must pull out of the valley. Of our friends who also had a fire, I know that it may take months before everything is clean again. And then we have to figure out the balance. We do have an insurance, but it is only for the houses. We do not get anything for the caravans, we will not get anything to live in the coming days. We will have to make a plan! '

Astrid Schipper is also about to return to her house after spending the night with a girlfriend. 'I'm not as close to the epicenter of the fire as Liedewij and Jolein, but live 25 kilometers away. But in the village next to me, Vales, there was a fire on Saturday night. And eventually a blazing leaf ended up on my neighbor's porch. It was terrifyingly alarming. Because yesterday the wind was my side, I left for a girlfriend who lives fifteen minutes driving, with my cat and my dog. But you are really worried about your house, after a couple of hours, I'm going to check for a few hours. Everything was ok, but I did not feel safe and left soon. '

On the way back, the wind turned again. 'He was straight towards Beco, my girlfriend's house! I told her that it was not safe that we had to go somewhere else. But she did not want to leave, she's already 83. She said, 'I've lived here for 21 years and I'll stay here. 'Another girlfriend who was with her said to me,' You should not drive through the woods, because if the fire reaches you then you're out of control. That's exactly how all other people are stitched. ' In the end we went to her house together: a stone house, on a town square. I thought, it should be very strange when the fire comes to it. It was terrible to leave my other girlfriend in her house, but it's happily well done. And fortunately, it is now safe with me, I'm going home! '