Home / World / 'Everybody comes back to the jungle ' 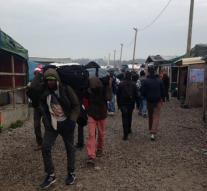 - The evacuation of the jungle expires in peace. Since early this morning are migrants in line to get a seat in a bus to a reception center.

Hundreds of migrants, mostly Eritreans, Sudanese and Ethiopians, flocking bag and baggage from the jungle. At five to nine left the first full bus towards Burgundy. It is planned that today sixty rooms, each with fifty places at shelters across the country. Tomorrow there are another fifty available Wednesday around forty.

The crossing to England in the eyes of migrants El Dorado, have given many. It is almost impossible to climb on a truck, the method used so far. 'I want to stay in France', put Afghan Erhan (20). With some friends, he waited until the rows which have been resolved, all together they walk the few hundred meters from the camp to the assembly. The boys do not lose sight of each other because they want to come together in a shelter. 'But the language I find very difficult. '

The exodus is noticeable in the jungle: it is quiet and deserted huts. A group of Afghans standing in the doorway of a now closed restaurant. Lala Muhammad (36) do not know yet what he will do, maybe tomorrow he gets on a bus. 'But I'm not sure I get asylum here because I have already given my fingerprints in Italy. 'The interior minister has promised that people who are already registered elsewhere- could get asylum in France- against the rules of the Dublin Agreement.

The four friends standing around him, looking skeptical. They would still prefer to England, saying in broken English that they come back to Calais. 'Everybody comes back to the jungle and then we'll try again. '