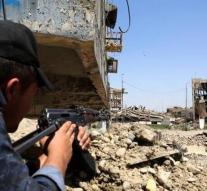 geneva - Terrorist Group Islamic State (IS) is killing more and more civilians who flee from the siege of the Iraqi city of Mosul. The United Nations Human Rights Office is concerned about the rapid increase.

The UN has received credible messages that 231 civilians who tried to escape the center of Mosul have been killed by IS since 26 May. In addition, between the fifty and eighty people were killed by an air strike on the city on May 31st.

Mosul was the second city of Iraq with about 1.8 million inhabitants, when the place was under foot in June 2014. By the end of the year, an estimated half a million people flew away.

In October last year, Iraqi armed forces, Shiite militia and Kurdish warriors with military assistance from, among others, the USA, Iran and France began the revival of Mosul. Since then, another 580,000 people have left the city. An estimated five hundred IS warriors are located in the old city center.