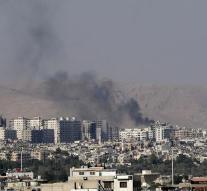 beirut - Hundreds of Syrian rebels began Monday leaving Barzeh district in the capital Damascus. The evacuation is part of agreements between the rebels and the government of President Assad, reports the Syrian state television.

The insurgents leave for the Idlib province, in the northwest of the country. That area is under their command. Observers saw the evacuation of hundreds of rebels and their relatives so far without incidents. It is expected to take a few days until all warriors have left.

The district in Damascus had long been the scene of bloody fights between the Syrian army and the insurgents. Elsewhere in Syria there is still a fierce battle between both parties.