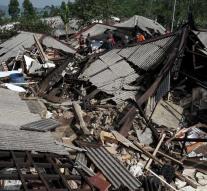 jakarta - An earthquake with a force of 4.4 has destroyed hundreds of houses in the Banjarnegara district in Central Java. More than 2000 people had to leave their home.

The authorities said that two people had died and about twenty people were injured. The newspaper Jakarta Post reported that several mosques have been destroyed.