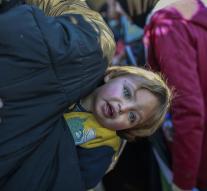 aleppo - The evacuations in the Syrian city of Aleppo seem finally begun. The Syrian army and its allies have consented to five buses with civilians and two ambulances with wounded to leave occupied territory.

The convoy had to wait for hours before it was allowed to leave. It is left for the area occupied by rebels al-Rashideen. That says a Syrian observation team.

Tens of thousands of people are still waiting for evacuation in appalling conditions in the winter cold and without proper facilities.