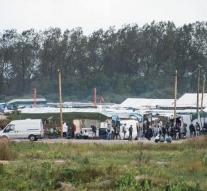 - The French authorities begin Monday with the removal of migrants from the makeshift refugee camp near Calais. The so-called jungle must according to an official from the Interior Ministry will be dismantled in a week.

Thousands of migrants and refugees have sought refuge in the camp. They try to achieve in many cases, Great Britain. The authorities expect nearly having to bring about 6,500 people to about 450 centers.

According to the official, the migrants are transferred to a huge hangar. There is checked whether it is unaccompanied children, families, adults or vulnerable persons.

In dismantling the camp would be concerned about 1250 officers and gendarmes. After the jungle migrants have been taken, they have to undergo a medical check and decide whether they want to apply for asylum.