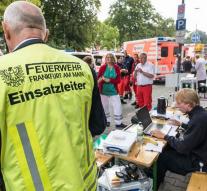 frankfurt am main - Tens of thousands of Frankfurt residents have to temporarily leave their homes because of the destruction of a bomb from World War II. The evacuation started at 6 o'clock is the biggest in decades in Germany.

Patients from two hospitals and residents of ten retirement homes are also accommodated elsewhere. Public transport is almost flat all day and the airspace is partly closed. Whether airplanes can land at Frankfurt airport depends among other things on the wind.

The blindman was found on Tuesday during construction work in the Frankfurt-Westend district, just outside the city center. According to Bild, it is a 1800-kg heavy-duty aircraft of the type HC-4000 with 1400 kg of explosive.