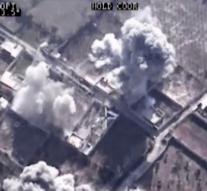 damascus - The evacuation of Islamic fighters and their families from an area in the south of the capital Damascus has been averted. This was reported by a Lebanese TV station of the group Hezbollah.

The evacuation according to the transmitter was canceled after the death of the well-known Syrian rebel commander Zahran Aloush. Which was killed by an airstrike on his secret headquarters. The convoy with the fighters and their families would go through an area controlled by the group of Aloush. Aloush was the commander of Jaysh al Islam, one of the most powerful rebel groups in Syria, with an estimated several thousand armed supporters.

Negotiations on the evacuation of about 2,000 combatants and their 1500 families have taken quite some time and were made under the auspices of the United Nations. Eventually, the Syrian government and the other parties, Islamic State and al-Nusra Front agree that the group could be brought to the place Raqqa.

According to the Lebanese TV station Friday were the buses arrived to pick up the fighters and family. The vehicles are now gone.