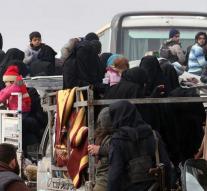 beirut - The evacuation of residents from the besieged districts of Aleppo has begun. A number of buses with insurgents and their families departed from the eastern Syrian city. This was announced by the Syrian state television Sunday afternoon via a correspondent on the spot. The convoy arrived, according to the Syrian Observatory for Human Rights under the auspices of the International Red Cross.

In eastern Aleppo would stop still more than ten thousand people. The rebel area in the east of the city after fierce bombardments in recent weeks by government forces, backed by Russia and Iran, almost completely conquered.

Simultaneously with the evacuations from Aleppo would by convention also people from the Shiite villages of al-Foua and Kefraya be evacuated in the southwestern province of Idlib. They are besieged by Sunni rebels. According to Syrian TV stand there the buses evacuees at the point of leaving.